We are so excited to announce the line-up for the SLAMbassadors Showcase 2018. On 18 November at King’s Place, London, we’re having a huge celebration of SLAMbassadors and all the lives it’s touched over the past 17 years.

First we want to thank everyone who applied for this year’s SLAMbassadors Masterclass and Showcase. In your applications, your poems and your passionate performances, you shared with us a little piece of you and we are so thankful. We wish we could invite every single one of you to take part in the Masterclass and the Showcase – but we had to whittle down the immense number of applications to just twelve stunning young performers. We hope you’ll all join us in the St Pancras Room at King’s Place from 4pm on Sunday 18 November to see them take to the stage.

Eight new artists will work with Joelle Taylor over an intense weekend of Masterclasses, creating new work and improving their performance skills, and preparing to bring their best to the SLAMbassadors Showcase on 18 November. They are: Destiny Adeyemi, Aaisha Alfathi, Noah Jacob, Jaeden Koshoni, Joshua Eyakware, Matt Sowerby, Beth-Ellen Hollis and Precious Olisaokafor. Joelle and the SLAMbassadors team were so impressed with their applications and we can’t wait to work with them.

Four more emerging artists, who are already starting to establish a name for themselves on the spoken word scene, will take to the stage at that Showcase. These acts are hand-picked by Joelle Taylor herself and we’re so excited to be part of their journey to stardom. They are: Bex Gordon, Katie Walters, Matt L.T. Smith and Aoife O’Connor.

These twelve SLAMbassadors 2018 participants will perform alongside some of the biggest names in spoken word today who have risen up through SLAMbassadors: Anthony Anaxagorou and Ollie O’Neill, both former winners.

Joelle Taylor will be our host, our compere, and our headline act. This will be a gig you won’t want to miss. Find out more and reserve your free tickets by emailing slam@poetrysociety.org.uk with your full name and age if you’re under 18.

Joelle Taylor is an award-winning poet, playwright and author and the founder of SLAMbassadors. She has published three full collections of poetry – Ska Tissue (2011), The Woman Who Was Not There (2014) and Songs My Enemy Taught Me (2017) – and contributed to numerous anthologies and texts. She is a Subject for Study on the OCR GCSE paper. Her work has been featured on television and radio, and she is currently coming to the end of a year-long world tour, from Australia to Estonia and all points in between. She is the host of Out-Spoken, London’s premier poetry and music club.

Anthony Anaxagorou is a British-born Cypriot award-winning poet, fiction writer, essayist, publisher and poetry educator. He was one of the first SLAMbassadors winners. He has published nine volumes of poetry, a spoken-word EP and a collection of short stories. His poetry and fiction have appeared on BBC Newsnight, BBC Radio 4, BBC Radio 6 Music, ITV, Vice UK, Channel 4 and Sky Arts, as well as being published in The Poetry Review, The Feminist Review, Amnesty International’s Words That Burn and John Berger’s anthology The Long White Thread of Words. Currently he works as the writer in residence at Whitmore School in Harrow and Queen Elizabeth Boys school in Barnet where he teaches poetry. In 2012 he founded Out-Spoken, London’s premier poetry and live music night, and Out-Spoken Press, an independent publisher of poetry and critical writing that aims to challenge the lack of diversity in British publishing. 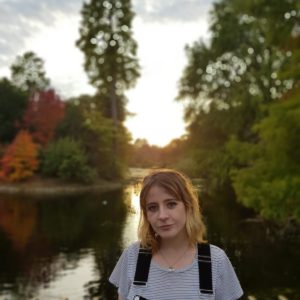 Ollie O’Neill is a young poet based in London. In 2013 she won SLAMbassadors, the UK’s national youth slam championship, and she has since gone on to read at venues such as Soho Theatre, The Institute of Contemporary Art, Cheltenham Literature Festival, and many more. She was shortlisted for one of the Out-Spoken Prize for Poetry categories in 2018 and will be publishing her debut pamphlet with Out-Spoken Pres.

Described as an upfront, unique and unpretentious voice of British poetry, Bex Gordon is an explosive performer and writer. Her poetry has a strong voice and bravely talks us through being a carer for someone who is severely disabled, being queer, having anxiety, being Jewish, and many other topics. She has performed her work across in the country including in Royal Albert Hall, in festivals including the Edinburgh Fringe and in a multitude of pubs and back-gardens. She won the coveted title of Shambala’s Slam Champion in 2017 and has also performed as a feature poet in Barcelona. Bex Gordon has just finished her debut poetry collection and is looking to be published in the near future. Keep up to date with her latest shows on Instagram and Facebook @BexGordonPoet and on YouTube.

Katie Walters is an autistic and physically disabled spoken word poet from the Midlands. She was a winner of SLAMbassadors in 2014, and has stuck to the stage ever since. She has worked with the National Autistic Society on a variety of performances and awareness campaigns, competed in the Roundhouse Slam, and performed at Greenbelt festival. She is currently a member of the 2018 cohort of Birmingham Artivists in Training, an arts activism development program run by Beatfreeks.

Matt L. T. Smith often writes about change. In his piece ‘Sclerosis’ commissioned on the topic of change, for Southampton’s Festival of Words, Matt explored how change can be personal. Change can be a father made redundant, a grandparent’s passing or a hospital appointment. An alumnus of Barbican Young Poets earlier this year Matt made his debut performance in a spoken word show in A Change is Gonna Come, at the Barbican’s Pit Theatre, directed by Jacob Sam-La Rose and Mikey J. Through his work Matt seeks to convey the intimacy of change through explorations of family and mental health that try to capture emotional truth through abstraction.

Aoife O’Connor was young when she found spoken word by joining a youth writing group Leeds Young Authors when she was 14. LYA provided her with lots of opportunities to perform and slam all over the world and taught her how to write and perform. Since moving to Derby to study Creative and Professional Writing, she has performed and featured at night all around the country and have co-founded a new night to support and promote the underrepresented in the arts.

Destiny Adeyemi is a poet and spoken word performer, currently in the 18/19 Barbican Young Poets programme. She grew up in Nigeria and lives in London performing at local open mics and poetry events. Her poetry takes inspiration from her upbringing, personal experience and feminist beliefs.

Aaisha Alfathi is a 15-year-old poet born and raised in London. She adores English Literature and has been writing poetry for six years. She has performed her work at events across the UK and is published in a young writers’ anthology.

Noah Jacob is a transgender Muslim poet and performer based in London. He has been writing and performing since 13, when he was published in First Story anthologies and partook in performance competitions. He now performs at Poetry LGBT spoken word nights, exploring his experiences of growing up queer, Arab and Muslim. His favourite poets, performers and writers are Audre Lorde, Rumi, the rapper Milo, Pablo Neruda and Alyssia Harris.

Jaeden Koshoni is a young poet who has been writing since the age of ten, his grandmother is an author and has helped him elevate his level of work since he started. He is very interested by spoken word and in particular ‘Holly McNish’. She was the person that really inspired him to improve his writing. He has studied and gone on several roundhouse courses. His poetry is often about feelings he can’t express and exploring the person he is/wants to become.

Matt Sowerby is 17 years old. Since performing at an open mic at the Kendal Poetry Festival in 2017, Matt has become a member of Dove Cottage Young Poets (ran by Kim Moore), ran workshops on Performance Poetry and read at Borderlines Book Festival, Lakes Alive Festival and Lancaster Spotlight. As well as this, he was Young Poet in Residence at the Kendal Poetry Festival 2018. Matt has appeared on BBC Radio Cumbria, That’s Cumbria TV and Saturday Live on BBC Radio 4 for his protest poetry on the Education System (which can be found on his YouTube Channel) and was also the winner in the 16-18 age category of Young Poet Network’s End Hunger UK Challenge. His work has been showcased around the UK, including at the House of Commons.

Joshua Eyakware is an aspiring writer and performer, who has been working on his craft from a young age. He has been part of a youth theatre group since 13, with Shakespeare’s Globe and Theatre Peckham, and has performed in plays such as Othello, Much Ado about Nothing and Chinyerem Odimba’s The Sweetness of a Sting. His acting has enabled him to bring his own writing to life through spoken word. He has had one of his poems published in an anthology, Busta Rhyme, produced by the Young Writers in 2017. Whilst admiring the literature of Shakespeare, he adopts a more lyrical approach to his art, with artists such as Kendrick Lamar, Lupe Fiasco and Spoken Word artist Suli Breaks influencing his style of writing and performance. Joshua aspires to be a multifaceted artist like Donald Glover (aka Childish Gambino).

Beth-Ellen Hollis is an A-level student, born in 2002, and has been writing since she joined the school’s spoken word club about three years ago. She spends her time watching spoken word performances on YouTube, many of whom heavily influence her style of poetry, in addition to musical artists’ lyrics and story-telling. In 2016, she was highly commended in SLAMbassadors. Since then, she has continued to work on her poetry, and is currently working on a poetry collection.

Precious Olisaokafor is a 17 year old poet and novelist. Since writing her own novels and listening to artists and novelists such as Suli Breaks and Chimamanda Ngozie Adichie, she has developed an intrigue for orally presenting her thoughts and ideas through various emotive performance styles and storytelling. With personal works such as “I am William” (in commemoration of Shakespeare), performed at the Globe theatre’s Sacker Studios and taking part in the BBC school report, to pitch a speech on the controversies of immigration, religion and colourism, she has come to be a writer interested in the social and emotional awareness of her audience and how they conceptualize social norms.

Reserve your tickets now for this unmissable night!