The SLAMbassadors have been all over the television and radio, and even those Members of Parliament are paying attention. See for yourselves.

The winners of 2011 are honoured by Apples and Snakes!

Sin One records a track for us

The winners of 2010 are honoured

→ Benjamin Zephaniah is a mentor for the SLAMbassador project 2009

Featuring this year’s winners, and a review of the showcase performance at the Royal Festival Hall on 30 April.

→ Poetry’s life of grime: Why young rappers are the natural successors to Tennyson

→ Roll over, Wordsworth: a new generation of poets keep the art alive

HM Treasury report, with the Department for Children, Schools and Families

In 2007, the Department for Children, Schools and Families recognised the importance of the Rise Slam, and its off-shoot the SLAMbassadors, to engage hard-to-reach and disaffected young people. This was a highlight in the history of the slam, and renewed The Poetry Society’s commitment to building on its reputation as the only professional development slam in the UK. 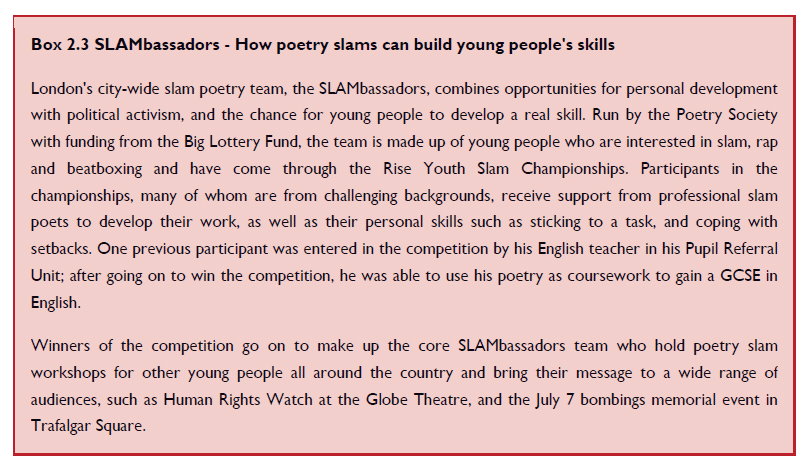 In 2005, on National Poetry Day, the winners took part in a live television slam judged by Ms. Dynamite. The 2005 overall winner, Laniya Numakasa, and SLAMbassadors Korbel and PACE, were picked to freestyle to a theme of Blue Peter presenters’ choice.

In 2005, Joelle Taylor was approached to act as a mentor on CBBC’s Faking It style programme. The aim of the programme was to prepare the presenter Otis as a performance poet, help him to write an original piece and then guide him through performance techniques before giving him his first bite of a live spoken word performance at the Rise Festival in July of that year. All went to plan – apart from Otis forgetting some of his words live on camera! – and the audience judged that he had indeed Faked it well enough. However, as Otis himself said at the time, he would hang up his stanzas for a while and let the real young professionals take over…

In July 2007, the BBC filmed Sic Sense performing live at the Rise Festival for a debate on the subject of gun and knife crime. They followed this with an in depth interview with Chris Preddie about his personal experiences.

Korbel appeared on a film by Debbie Anzalone recorded for 3 Minute Wonder, about his life and his lyrics.

Chris Preddie appeared on Donal McIntyre’s Street Crime Live programme on 5th November 2007, looking at why gangs form and more importantly how people may break out of them. This was an extraordinarily brave and risky interview by Chris, involving him returning to his former stamping grounds and encouraging others to leave.

Kiss FM interviewed Joelle Taylor live from outside the semi finals in 2005, and pumped it straight out on the air. It was unheard of for a dance radio station to promote the spoken word, and we are still wondering quite how it was received by the hard core toe-tappers.

In 2007, the Angie Le Mar Show invited Joelle Taylor on to talk about the Rise Slam along with the previous year’s winner, Chris Preddie. What began as a brief chat soon turned into a full-blown performance from Chris and Joelle. Chris’ poem ‘Apology’ to his mother was recorded and replayed throughout the day – even on the Richard Blackwood Show.

Teon Blake, Sic Sense, Chris Preddie and Joelle Taylor took over Radio 1, spitting original raps and rhymes and bigging up the Slam for a full half hour. By the end of the allotted time, their mobile phones were full of text messages from eager young artists wanting to sign up. It is the first time that a project like this has had such a remarkable opportunity to reach so many people.

On National Poetry Day 2007, The Poetry Society organised a Slam at the London Transport Museum organised. Stephanie Turner and Onome Edgeworth triumphed, and also won the prize of Poet-in-Residence at the Transport Museum. As a result, they performed their winning piece on the Matthew Wright Show on Radio 2, and were also interviewed.

On 24th May 2006, the Poet Laureate Andrew Motion published an article about the Slam quarterfinal he witnessed at Jackson’s Lane Theatre in Highgate. The double page spread with full colour photographs entitled I Think Therefore I Slam gave much needed and appreciated positive coverage of the championship.

→ I Think Therefore I Slam by Andrew Motion in Time Out, May 2006

On 27 November 2004, Jay Bernard featured in the 16 year anniversary edition of the Guardian Weekend Magazine – a publication that focused on talented 16 year olds who were predicted success. Jay had recently won the Rise Slam, as well as being chosen as a Foyle Young Poet. Her photograph was taken by none other than David Bailey.

In April 2004, Christina Patterson attended a Slam quarterfinal at the Institute of Contemporary Art and, as a result, published the article Rhyme Wave in The Independent. This was an event close to Patterson’s heart as she was instrumental in the setting up of the slam, and in contracting Joelle Taylor to coordinate the project. Nevertheless, we were unprepared for the huge two page feature that appeared in such a prestigious publication, indicating that the slam format wasn’t simply being dismissed as a hip hop event by the national newspapers anymore, and was slowly being incorporated into serious mainstream poetry culture.

→ Rhyme Wave by Christina Patterson in The Independent, 15 June 2004