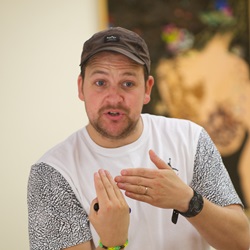 Steven ‘Polarbear‘ Camden has been leading young people’s writing and performance projects with schools and arts organisations since 2006. He has delivered story writing and spoken word courses with the British Council in Malaysia, Slovenia and Rotterdam.

He has been commissioned by BBC radio 3 and 4 to write narrative pieces for broadcast and his work has also featured on Radio 1 and 6 music. He has been lucky enough to perform his narrative spoken word around the world from Glastonbury to California and has toured four feature length theatrical monologues nationally and internationally.

His most recent piece Mouth Open Story Jump Out is an interactive story experience for 8-12 yr olds, which toured nationally from Autumn 2013 through Spring 2014. Last year he wrote his first YA novel Tape to critical acclaim.