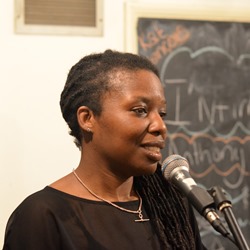 Kat Francois is a performance poet with many accolades, including being the first person to win a UK televised poetry slam, held on BBC3 in 2004.

Following this success, Kat was invited to take part in the World Slam Championships in Rotterdam, competing over 2 rounds against national champions from Canada, USA, Sweden, Australia, Germany, South Africa. Kat won the competition and was crowned World Slam Champion 2005.

Kat has been published in a number of anthologies. Her first collection, Rhyme and Reason, was published in 2008. She has over 20 years experience of working with young people in a variety of formal and non-formal educational settings, and is also a theatre director and playwright.