It has been one joyful  shriek of a journey for SLAMbassadors over the last fortnight.

First we had an incredible, magical, stomach-punch of pure poetry in the Royal Festival Hall for the SLAMbassadors Final Showcase. Over 500 people booked in to witness the beginning of a new wave of spoken word smash across the shores of the Southbank. It was an utterly awesome night that featured a headline set from Hollie McNish and freestyle madness from INJA, to a backdrop of jaw-dropping visuals provided by VJ’s Emily B and Naomi G under the guidance of VJ Harper. 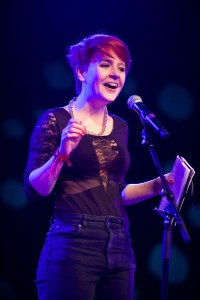 Six overall winners of the national solo youth slams took to the stage after an intensive masterclass with me (Joelle Taylor), and stitched together stories of the truth beneath the veil, of sexuality and homophobia, rage, love, of inconceivable loss and of abandonment. There were tears. There was laughter. There were a thousand poems written on the bus on the way home. 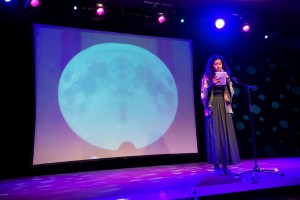 While each of the performances was literally off-the-  hook one of the enduring images for me was of a small  woman in full burkha and niqab spitting sense into a  microphone. It is an uncommon sight, an uncommon experience, and we are privileged that she chose SLAMbassadors to speak out for her beliefs and community. You can take a look at some of their films here and get a sense of the night. A film of the finals will also be made available as soon as possible. Along with a live soundtrack to the gig. Thank you massively to all who took part and watched. You are stunning. You are well written. You finish the poem.

And THEN we were invited to Buckingham Palace for a Reception to Celebrate Contemporary British Poetry. Around 300 poets and spoken word artists from across the UK were invited to attend as representatives of a far greater number. There were the Poet Laureates, the Gold Medal winners, the page poets, the spoken word superstars, the slam poets – and the SLAMbassadors! It was deeply heart filling to see that not only I had been invited but former SLAMbassadors winners as well – Jay Bernard, Kayo Chingonyi and Aisling Fahey.

And if that were not enough we then HIT Parliament on Saturday to take part in the GLA’s historic Parliament Week Finals, to celebrate Women in Democracy. I led 2 poly-vocal workshops during the day which fed directly on to the stage. The young people who took part were phenomenal, brave and uncompromising. I was helped massively in this impossible task by the Spoken Word Educators who turned up with a whole crowd of kids wanting to take part. In total over 600 young people came to the gig. Wow.

There are always opportunities for talented and committed emerging artists here at SLAMbassadors HQ. Please check in regularly for updates, or like The SLAMbassador Sessions Facebook page for information on gigs and workshops.