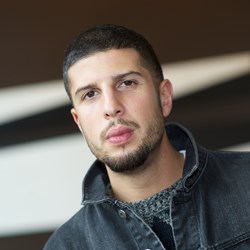 Anthony Anaxagorou was the first critic’s choice winner of SLAMbassadors UK in 2002 (known as Rise Slam at the time) and he returned to the slam the next year, before departing to make music with his band. He came back with a vengeance the following year, performing live for SLAMbassadors at the 02 Arena in memory of Stephen Lawrence.

Since then Anthony has gone on to become an established and enormously respected poet on the UK spoken word circuit. He has published eight volumes of poetry, a spoken word EP, a book of short stories as well as writing for theatre.

His poetry has appeared on BBC Youth Nation, BBC Newsnight, the British Urban Film Awards, BBC 6 Music and been performed by Cirque du Soleil. Anthony is the founder of Out-Spoken – one of London’s premier monthly events for poetry and live music held at The Forge, Camden. He also founded Out-Spoken Press in 2012.